Three years after the first edition, the “Giardino degli Antichi Sapori” is back.

On May 25, 26 and 27, on the occasion of the June Pisano, the Giardino Scotto in Pisa will be the focus of a series of historical re-enactments, cultural initiatives, demonstrations of ancient crafts, tastings of traditional dishes and educational workshops for children.

A journey through the knowledge and flavors of the past, through tastings of dishes that were consumed during the Middle Ages, with revisited recipes handed down to the present day, prepared during real show cooking by starred chefs, such as Cristina Pistolesi https: / /www.artincooking.org/ that will hold a workshop of medieval cuisine making protagonists the visitors intervening for the event (cost € 15.00 with reservations required).

The agri-food companies of the territory, gathered in the Consorzio Toscana Sapori http://consorziotoscanasapori.it/ will be spokesperson of the immense Pisan food and wine heritage, presenting the typical products of the area, processed and transformed by chefs cooks in dishes and recipes of the oldest tradition of Tuscan cuisine, prepared for the aperitif in music that will be accompanied by the voices of the Ensemble Pisa Early Music.

The medieval era will also be represented through a series of historical re-enactments, as well as demonstrations of ancient arts and crafts related to agriculture, the rural world and crafts, to understand their evolution over time, as evidence of a deep-rooted tradition on the territory and the need to popularize popular knowledge.

To allow a wider participation of the families, educational workshops organized by the cultural association Cooltouralmente http://cooltouralmente.weebly.com/ are planned for all three days of the event, to tell even the youngest the ancient history of Pisa.

What was the Scotto garden for? What are these towers that surround it? Let’s find out how the fortresses were built in the Middle Ages, what they were used for and built a 3d model of a castle, with battlements, drawbridges, watchtowers. At the end of the work, the children will be able to take home their work.

17.30-19.00 THE SMALL ARCIERI
AGE BAND: 5-12 years
The arch is one of the most simple and ancient weapons that man has built and used and in the collective imagination the medieval archers are certainly linked to the great battles. Fortunately times have changed but the bow and arrows remain a fascinating and easy to build game! Just a bamboo cane and string and we can all defend Pisa from enemy attacks! At the end a good archery competition! Children can bring their work home.

Laboratory aimed, through a multisensory experience, to the knowledge of aromatic herbs and spices in medicine, cosmetics and in the kitchen. Participants will be able to paint using the previously known spices, thus being able to appreciate their color, the intense perfume and their consistency.

The coat of arms of Pisa, in the early years of the thirteenth century, contained the image of a black eagle with the lowered flight, in the golden field, now symbol of the Province, then replaced by the famous “Cross”. Let’s find out what the origin of these symbols was and what the badges like this used in the Middle Ages. Through some panels will illustrate the origins of this emblem that still stands in every corner of the city. After the explanation, the participants will be able to make small plaster casts of the Pisan cross and the eagle to be used as pendants.

The cost is 5 euros per lab and some packages are provided:

Reservation is appreciated by writing to:

For the detailed program of the entire event click here
http://www.cnapisa.it/giardino-degli-antichi-sapori-viaggio-nella-cultura-pisana-attraverso-arte-storia-e-tradizioni-culinarie/ 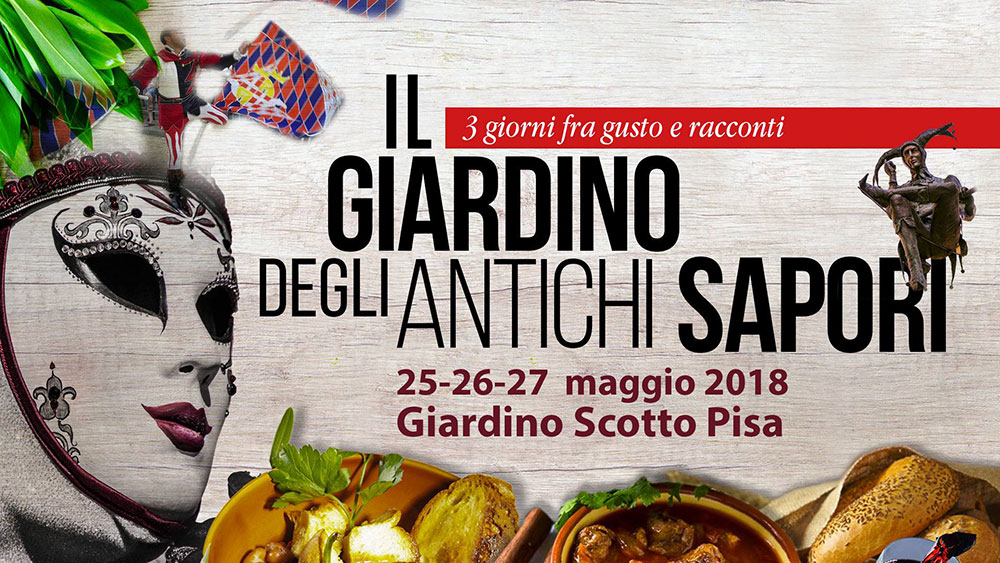